We’re proud to announce that on Friday 21 June 2013, UNESCO enlisted the Namib Sand Sea as a World Heritage Site. It is a triumph for not only for Namibian tourism and conservation, but for this beautiful desert that has already dazzled many visitors with its vastness and beauty.

As UNESCO put it: “Namib Sand Sea (Namibia) is the only coastal desert in the world that includes extensive dune fields influenced by fog. Covering an area of over three million hectares and a buffer zone of 899,500 hectares, the site is composed of two dune systems, an ancient semi-consolidated one overlain by a younger active one. The desert dunes are formed by the transportation of materials thousands of kilometres from the hinterland, that are carried by river, ocean current and wind. It features gravel plains, coastal flats, rocky hills, inselbergs within the sand sea, a coastal lagoon and ephemeral rivers, resulting in a landscape of exceptional beauty. Fog is the primary source of water in the site, accounting for a unique environment in which  endemic invertebrates, reptiles and mammals adapt to an ever-changing variety of microhabitats and ecological niches.”

The Namib Sand Sea met all four criteria for becoming a natural World Heritage Site, making it the first natural site for ten years to do so. That puts the Namib Sand Sea on a par with The Galapagos Islands off the coast of South America and the Great Barrier Reef off of Australia that also fulfilled all four criteria when they were added to the list in 1978 and 1981 respectively. Of the 13 sites nominated this year, eight fulfilled only one or two of the categories.

In order for a natural site to be listed, it must meet one of the following four criteria

- To be outstanding examples representing major stages of Earth's history, including the record of life, significant ongoing geological processes in the development of landforms, or significant geomorphic or physiographic features;

- To be outstanding examples representing significant ongoing ecological and biological processes in the evolution and development of terrestrial, freshwater, coastal, and marine ecosystems and communities of plants and animals;

- To contain the most important and significant natural habitats for in-situ conservation of biological diversity, including those containing threatened species of outstanding universal value from the point of view of science or conservation.

Thanks to all the Namibians and partners who helped to make this possible!

Let the Namib desert enchant you: 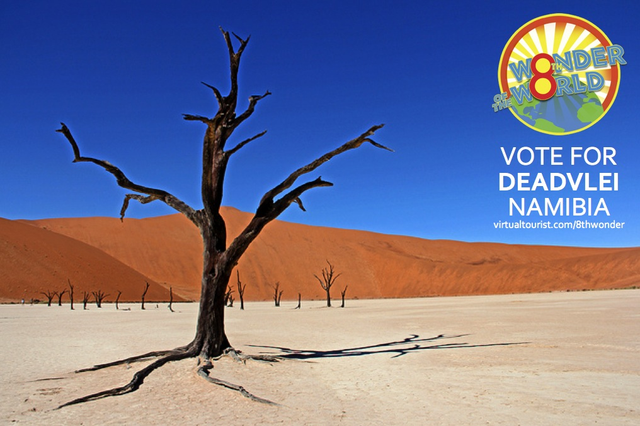 Read more about Deadvlei and the 8th wonder of the world here or click here to vote for Deadvlei each and every day!